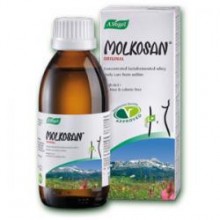 Molkosan® is one of Alfred Vogel’s original remedies. Made from whey obtained from organic milk, Molkosan® is rich in a substance known as L+ lactic acid which is now known to support the growth of good gut bacteria. In this way, it acts as a prebiotic.

Benefits and features of Molkosan® Original:

Whey has a long history of use in healthcare and was known as far back as the time of Hippocrates (400 B.C.). In the 18th Century, whey enjoyed a renaissance, securing an enviable reputation and became popular with visitors to health resorts such as those in Gais, Switzerland, which was frequented by European royalty.

In the past, the trend has been to use probiotics for digestion problems. However, the difficulty is that if the internal environment hasn’t changed, probiotics will be killed off just as the original friendly bacteria were.

Using prebiotics such as Molkosan® to improve the internal environment of the gut increases the likelihood that a probiotic supplement will work well.