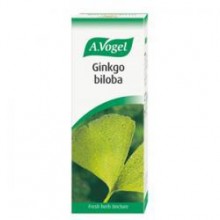 Ginkgo biloba is one of the oldest healthcare herbs known to Man. Fresh green leaves from the Ginkgo biloba tree are gathered each spring to create A.Vogel’s fresh herb tincture and tablets.

Benefits and features of Ginkgo biloba:

Alfred Vogel knew about the benefits of Ginkgo biloba many years before it became popular in the West and had his own Ginkgo biloba tree, planted on his return from Japan. This was his daily source of fresh Ginkgo leaves which he regularly chewed as he grew older to absorb the benefits of the valuable juices.

Directions:
Adults: 15 drops in a little water 3 times daily
Children: This product is not recommended for children

Food Supplement
Food supplements should not be used as a substitute for a varied and balanced diet and a healthy lifestyle.

Additional products to be considered:

1. For Tinnitus -  A Vogel Ginkgoforce; Vitamin B12 (methylcobalamin)